Why are the Dolomites pink? The Fascinating Phenomenon of Enrosadira 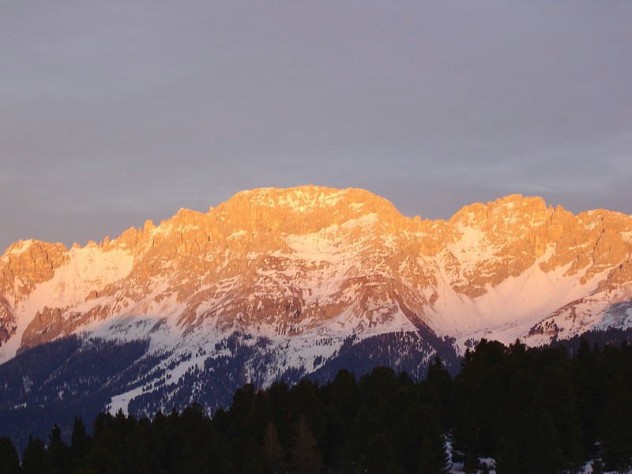 “One day the Prince of Latemar, intrigued by the beautiful rose garden of the dwarf king Laurino, entered. Among the beautiful roses he saw and fell madly in love with the daughter of King Ladin. Blinded, the prince abducted the princess to marry her, so King Laurino, desperate for not being able to see his daughter again and more aware of the fact that the blame for the whole affair was the lovely rose garden, put a curse on it: no man could admire the beautiful rose garden by day or by night. Laurino forgot the sunset and sunrise, where the world was in a sort of “limbo”, where there is neither day nor night

This is the legend; Enrosadira is one of the most fascinating phenomena of the Dolomites, the Marmolada Group that turns pink at sunset. This phenomenon is due to the composition of the Dolomite’s

rock walls that contain a mixture of calcium carbonate and magnesium. The Enrosadira phenomenon can manifest itself in very different ways depending on the time of year and can even vary from day to day. These variations of colours and durability are due to the sun’s different positions throughout the year and the atmospheric conditions. This phenomenon manifests itself all over the Dolomites; especially at dawn where it appears on the crags facing east, while the walls facing west at sunset, magically colour. This phenomenon can also occur at the Gran Sasso in Italy.

A curiosity about the etymology of the name: Enrosadira is like Ladin in origin, and is very similar to German, where Rosengarten literally means rose garden.