We know it as the “green heart of Italy” for its large and luxuriant nature, dominated by different and amazing landscapes: it is Umbria.

Its soft and smooth hills framed by an agricultural context composed by vineyards and olive trees is the scenario which characterized the region of Umbria and that make it famous worldwide. Here is the green top list that can not be missed in this unique region.

The National Park of the Sibillini Mountains (Parco Nazionale dei Monti Sibillini) is a beautiful protected park from where it is possible to admire the Castelluccio Di Norcia plains. A green area surrounded by the highest mountains of the region considered one of the most important of Europe because of their botanical species richness: about 1800 ones, some of which are almost disappeared in the rest of the world. A special referring goes to the Macchia Cavaliere, a beautiful beechwood where some wild cats and wolfs stand. During the first days of June, the lentil blooming, a regional speciality, fill the Pian Grande valley of colours, giving it a picturesque atmosphere: a event not to be missed if you are in Umbria. 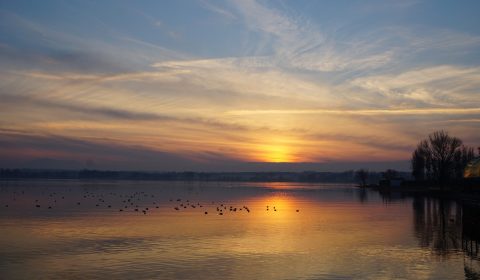 The Trasimeno, known also as the “Perugia Lake”, is a natural protected area which includes the three islands (Isola Maggiore, Minore and Polvese) too, surrounded by charming rolling hills, vineyards, olive trees and wheat plantations which just increase its beauty. The possibility to do some water sports, fishing and walks between green paths and beaches make this area be a tourist attraction.

Again, we remember you the Fonti del Clitunno: an amazing green and a Roman-period religious interest area for the worship of the river god Clitumno. This springs framed by holm oak woods, with their waters gushed from the rocks and ending into a beautiful small lake, where source of inspiration for writers as Carducci and Byron. The Fonti di Monteluco deserves to be visited too. Being part of the UNESCO World Heritage List, those springs were holy to Zeus and were protected under the “Lex Spoletina”during the Roman era. A place where peace and silent reign supreme.

Talking about Umbria, we can not forget the famous Marmore falls (Cascate delle Marmore), generated from the Piediluco Lake – the second largest lake of the region – located near the border between Umbria and Lazio. This amazing falls have been a source of inspiration for painters, poets and writers during the centuries.

The Subasio Mointain (Monte Subasio), the naturalistic oasis of Alviano (l’Oasi Naturalistica d’Alviano) and the Cucco Mountain (Monte Cucco) with its cavers, where the free flight can be done, have to be remembered too.

Finally, among the Umbrian landscape beauties there are also towns and hamlets, rich of history and culture: Perugia, Spoleto, Assisi – with its Rocca, UNESCO World Heritage -, Todi, Orvieto, Città Della Pieve, Castiglione Del Lago and many others.

Umbria is not just a charming land to be visited and discovered as tourists, it is also a place where to move permanently to fully enjoy everything this territory can offer to you. Visit greatestate.it to see all the amazing properties that the group proposes for sale in this region, we will surprise you!

Who is the typical international buyer? GATE-AWAY reveals it

Orvieto and its countryside: the destination of choice for a better life … even in retirement!

2017 HAS CLOSED DOWN: A LOOK TO THE INTERNATIONAL REAL ESTATE MARKET